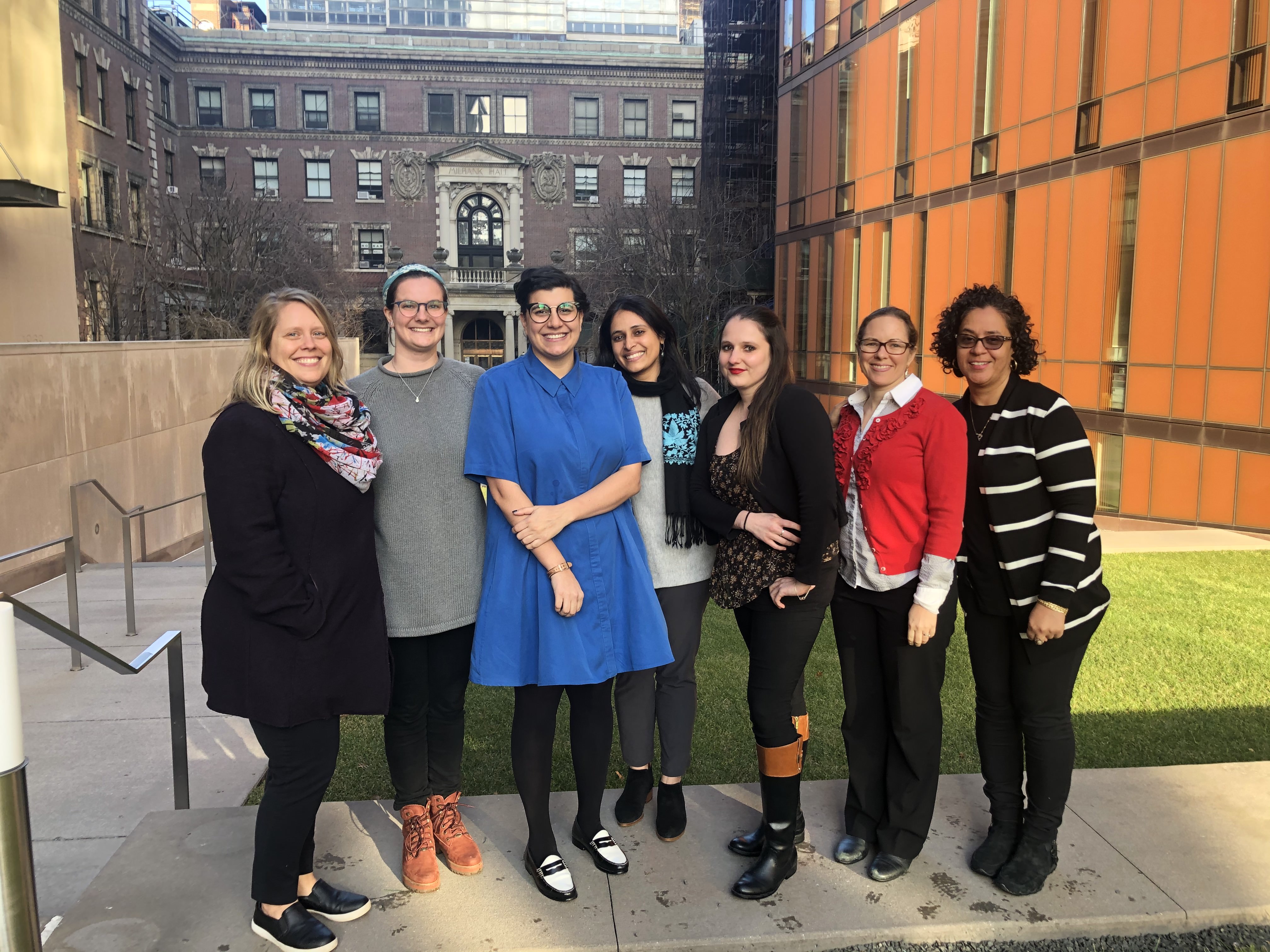 Umbreen Bhatti joined the Athena Center in April 2019 to guide the Center into its next chapter. Bhatti graduated cum laude from Barnard in 2000 as a political science major and Centennial Scholar and earned her J.D. from the University of Michigan Law School in 2005. Bhatti returns to the College with a wealth of experience in media, law, and non-profit management. Most recently, she served as Director of the innovation lab at KQED, the Bay Area’s NPR and PBS station. Bhatti also serves on the board of Global Press, a news organization dedicated to reinventing the craft and business of international journalism by recruiting diverse populations of local women and training them to become professional, ethical journalists. As a John S. Knight Journalism Fellow at Stanford University, she developed and then hosted the podcast “Kaleidoscope: Reflections on Islam.” Beyond media, Bhatti has worked with universities, libraries, local government, and nonprofits to support their efforts to meet the needs of their constituents in new and exciting ways. Earlier in her career, she practiced law at the Disability Rights Legal Center in Los Angeles, the ACLU in Wilmington, Del., and Latham & Watkins in Washington, D.C., and taught law students as an adjunct professor at the Widener University School of Law. Bhatti now lives in Manhattan with her husband, an executive in digital network news, and her two children.

Victoria manages the Athena Center staff and network of consultants, the Center budget, and supports all Center operations. She provides strategic support to the development of Athena’s core programs, including student programs, the Athena Film Festival, leadership development work, and Entrepreneurs@Athena. She sits on the President's Council, the Operations and Management Group of the College, and the Joint Faculty and Administrators' Benefits Committee.

Victoria has ten years experience in operations, development, and event management working for organizations including The Resolution Project, Room to Grow, Community Renewal Team and the Wildlife Conservation Society. She has a background in international relations and a passion for working with young people committed to social change and social progress. Victoria holds an MSc in Democracy and Comparative Politics from University College London and graduated with honors and an MA in International Relations from the University of St. Andrews.

Sarit is responsible for the development and implementation of Athena's student programs, primarily the Athena Scholars Program, the Athena Digital Design Agency (ADDA), and all Fellowship programs.

Before working with the Athena Center, Sarit directed the Women’s International Leadership Program at International House for seven years.  In this role she was responsible for curriculum design, student advising, organizing logistics and facilitating workshops and panels. Topics included, Cross-Cultural Communication and Awareness, Working in Multicultural Teams, Managing Conflict with Dignity and various themes related to women and leadership and career development. Sarit has a Master’s degree from New York University in International Education and a Bachelor’s degree from Binghamton University in Philosophy, Politics & Law and Spanish.

Throughout her career, she has gained a wealth of experience in all aspects of office administration in a variety of fields including corporate, government, healthcare, and higher education; providing high-level executive support to senior management.

Since joining Athena in 2015, Erika's passion for women's leadership has only grown, and is strengthened every day through her interactions with the broad network of students the Center serves. These interactions with the bold, brilliant, and inspiring Barnard students have led her to pursue an accelerated one-year Master of Science in Organizational Leadership from Lehman College. Erika holds a Bachelor of Arts in Culture and Deviance Studies from John Jay College of Criminal Justice.

Alisa has been working in higher education since 2013 in various administrative roles. She believes that there is a huge necessity for more women in leadership as well as a basic understanding of what leadership means and looks like, which is why she came to work for the Center.

Alisa graduated Summa Cum Laude with a Bachelor of Arts degree in Psychology from Lehman College. While at Lehman, she was inducted into the Golden Key Honor Society, Psi Chi - the International Honor Society in Psychology, and the Phi Beta Kappa Society. In her pursuit to see more women as leaders, Alisa continued on to graduate from Manhattan College with a Master of Science degree in Organizational Leadership. She hopes to use this degree to help other women realize their potential while expanding on her own. In her spare time she volunteers for Anjellicle Cats Rescue, and is a strong supporter of the “Adopt, Don’t Shop” movement.

Kristin has spent the past several years producing, managing, and otherwise working numerous film festivals and series including Rooftop Films, Slamdance Film Festival, the Montclair Film Festival, and the Hamptons International Film Festival. Most recently, she programmed films for the Northside Festival - a music, innovation and film festival that takes place in Williamsburg, Brooklyn. Kristin has also produced live concerts and worked on independent TV pilots. She received a Bachelor of Arts in Culture and Media Studies from Eugene Lang College The New School for Liberal Arts.

Opal is an integral member of the film festival team, managing all film and screenplay submissions and helping to curate the festival program. Opal has an impressive track record within the festival industry, working for Nantucket, Montclair, and Queens World during the past four years. A Columbia Law grad, Opal holds a Masters in Media Studies from the LSE, and received her B.A. from New York University.

Kory supports both the programming and operations sides of the festival, researching and reviewing film selections and working with the Operations Manager on all production aspects to the event.

Kory is a New York based writer, director and comedian. She’s from a small farm town in Massachusetts that is adjacent to a town with the smartest lesbians in the US. She packed up her flannels from both groups and moved to NYC to pursue a career in comedy. Her recent credits include her directorial debut with Man vs. Vibrator and surviving multiple open mic performances where men talk about pregnancy as a way to punish their wives…(I wish I were kidding). In addition to working with the Athena Film Festival, she has worked with the Nantucket Film Festival and the Tribeca Film Festival on their screenings teams. She graduated from Barnard College with a degree in English and Film Studies.

Skye is an Adjunct Lecturer at the Athena Center for Leadership Studies, teaching the Athena Senior Seminar. She is a philosopher and author of Existentialism and Romantic Love (Palsgrave Macmillan, 2015). Skye is the Managing Editor of the American Philosophical Association’s blog, an advisory board member of Strategy of Mind (a global executive learning firm), and a certified fellow with the American Philosophical Practitioners Association. Previously, she was an international equity arbitrageur and management consultant. Her work has been published with Aeon, TED-Ed, Los Angeles Review of Books, The Huffington Post, The Conversation, Business Insider, New Republic, New Philosopher, The Philosophers' Magazine, ABC Radio National, YourTango, Womankind, Actualise Daily and others. She is currently writing a book on Simone de Beauvoir. She has a black belt in taekwondo and loves scuba diving.

Sylvie is a Term Lecturer with the Athena Center for Leadership Studies. Before coming to the Athena Center in 2018, she taught undergraduate Sociology courses at Barnard, Bryn Mawr, Columbia, Tufts, and CUNY. She earned her PhD in Sociology from the University of Chicago, with a specialization in youth, life course theory and qualitative methods. Her doctoral project, Untangling the Apron Strings, examines how inequality in young adulthood is exacerbated by the emphasis on independence, a luxury afforded only to privileged young adults, and how it paradoxically enables a prolonged dependence on parents for financial and other types of support. Her focus on transition to adulthood gives her a unique perspective into the particular challenges and opportunities faced by young women as they move through higher education and into the workforce. Her other research interests include urban sociology, gender, sexuality, and stratification. She has done qualitative research on sexuality in young adulthood, income instability, and HIV stigma at the intersection of race, gender and class.